A Blurry Line Between Bar and Restaurant

A Blurry Line Between Bar and Restaurant 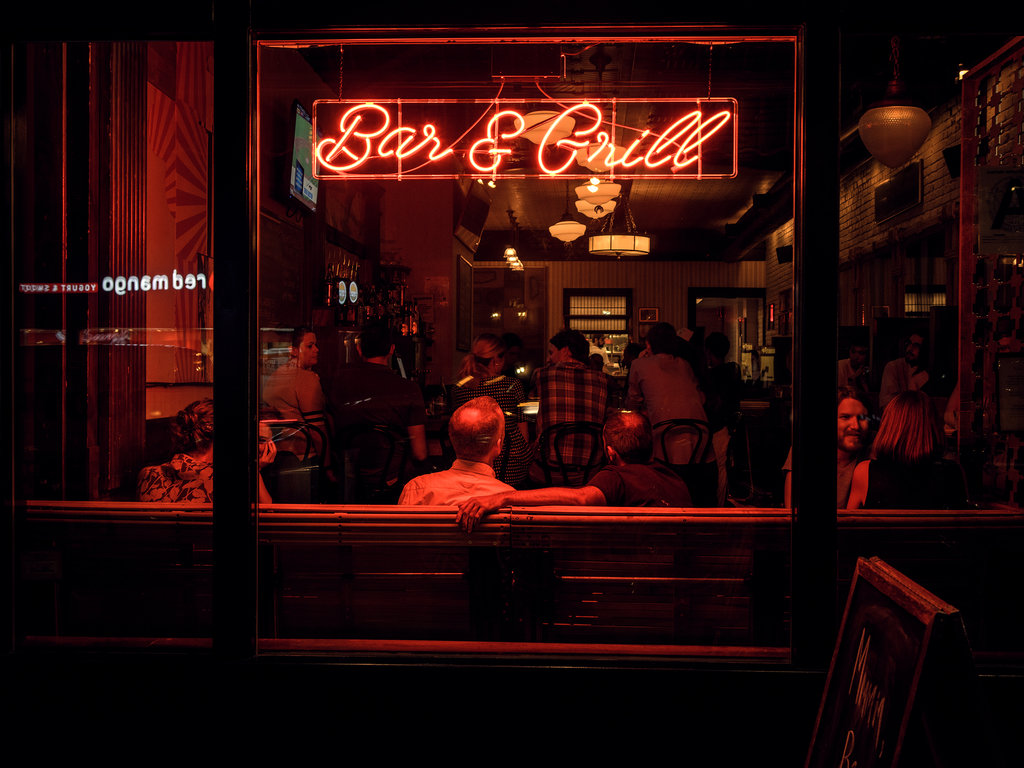 Years ago, when they were running an underground supper club, Daniel and Alicia Mekelburg dreamed of going legit with a restaurant on the first floor of a brownstone.

The couple finally got their own place in June, a few steps down from a sidewalk in Clinton Hill, Brooklyn. But it doesn’t look or act like a restaurant. In the front,Mekelburg’s is a grocery. In the back, unannounced by any sign, is a bar. People sit there or at a nearby table drinking interesting beers and underpriced wines. Some order food from the bartenders: oysters broiled with an angry red cap of sambal, or a sandwich of porchetta and bitter greens that is such a festival of textures and tastes, it makes you grateful to have working teeth and a tongue in your head.

The Mekelburgs have joined a mini-movement of New York chefs who are pouring their kitchen talents into bars instead of, or in addition to, traditional restaurants.

Ambitious cooks have been sniffing around the city’s watering holes for some time, but in the last year they formed a small stampede. Eric Ripert, Alex Stupak, Jean-Paul Bourgeois, Jeremiah Stone and Fabian von Hauske entered the bar business. Wine bars proliferated, with menus that went well beyond cheese and charcuterie.

In Brooklyn, the owners of Franny’s pulled the plug on their solid Italian restaurant, Marco’s, in Prospect Heights, Brooklyn, and when the lights came on again inside the place, renamed Rose’s, they were the dim, soft kind conducive to putting away a few mixed drinks. The very short menu runs to cocktail nibbles like fried olives, a classic New York bar burger with both butter and mayonnaise on the bun, and a single traditional main course, brined pork loin roasted on a spit.

For chefs and restaurateurs, bars with high-functioning kitchens must look like a sound business, especially with the high prices of mixed drinks these days. For those of us who like eating in bars, the appeal is more personal. A restaurant meal, like a movie, demands a time commitment. There are nights when this is just what you want, and nights when it feels torturously, anachronistically slow, like traveling to Miami on a tugboat.

Time in a bar is flexible. The only commitment required up front is to walk in the door. After that, decisions flow one at a time, and there’s always a quick way out. This can be handy in all kinds of modern social situations, from Tinder dates to group hangouts that coalesce and dissolve over several hours.

Making formal dinner plans at El Comado Butchery, for instance, would strike most people as a little weird. It is a fairly unprepossessing butcher shop that happens to contain a tapas bar, or vice versa. It’s best seen as a haven of sanity where you can escape the meatpacking district with a glass of Katas manzanilla on tap and a few of Seamus Mullen’s excellent Spanish snacks.

But if your stomach starts dropping hints that a more substantial payload would not be unwelcome, the butcher case awaits. There may be tiny, tender and nearly gamy lamb chops; or pork loin wrapped up in purplish and very flavorful pancetta made on site; or an odd-looking but tender cut of dry-aged steak. A cook tosses the meat on a plancha as the air fills with the aroma of sizzling fat.

At this three-month-old upgrade of the former Der Kommissar in Park Slope, Brooklyn, the beers are mostly German or German-inspired, and an excellent house-made bratwurst is a star of the food lineup. But the chef and owner, Jake Klein, finds his sausage inspiration from far and wide.

The Tokyo chicken number (juicy, salty and spicy from shishito peppers) is the most appealing chicken sausage I can remember. The one made from brisket with burned ends is a phenomenal piece of barbecue, packing more smoke into a sausage than I’d thought possible. Mr. Klein has led kitchens in Singapore, Hong Kong and Manhattan. At Jake’s, his menu is at least as original (the house-made banana mustard is improbably delicious) as the ones in some restaurants where I’ve paid four times more for dinner.

Porchlight is the first stand-alone bar from Danny Meyer’s Union Square Hospitality Group, and does it ever stand alone: This stretch of 11th Avenue is so unpopulated that Porchlight’s major competitor as a night-life destination is probably the city’s tow pound across the West Side Highway.

The chef is Jean-Paul Bourgeois, who is also in charge of the Blue Smoke restaurants, and he’s been smart enough to bring Blue Smoke’s sensational smoked beef jerky over to Porchlight. The tasso-and-Cheddar biscuits baked to order in cast iron have a tenderness that biscuits tend to lose when they travel this far north of the Mason-Dixon line. Above all, though, I’d go back for the dirty-rice croquettes, thoroughly penetrated by the taste of chicken liver.

Since you don’t see an army of waiters standing at attention, bars can seem to run themselves. They don’t. I’d had very high hopes for Aldo Sohm Wine Bar, opened last fall across a Midtown alley from Le Bernardin by its chef, Mr. Ripert, and its sommelier, Aldo Sohm. But the place needs attention.

On my most recent trip, crumpled paper towels piled up on the restroom floor. The menu was virtually unchanged since an October visit, when dishes like whole baked cauliflower or warm goat-cheese-and-potato parfait had more appeal. A chilled torchon of foie gras was beautifully done, but ice-wine jelly that came with it was not; it tasted like congealed chicken-and-cucumber soup. Strawberries in too-cold red wine crunched with undissolved sugar crystals. And while Mr. Sohm can talk about wine as engagingly as anyone, little of his enthusiasm had rubbed off on the other servers.

Another wine-bar disappointment was Fifty Paces, an offshoot of Marco Canora’s restaurant, Hearth in the East Village, with which it shares a kitchen. Unfortunately, everything I ate seemed to have been made by the most distracted cook in that kitchen. The Hearth-made charcuterie is great, though, especially the tangy discs of Petit Jesu.

Energy is high in other quadrants of the wine-bar scene this year, though, most of it coming from three new centers of the natural-wine cult. Those who have seen the light are eager to bring in converts to these wines. But proselytizers are easier to take when they’re holding an open bottle, something the people who ring my doorbell on Saturday mornings may want to consider.

The most effective evangelist was my server at Wildair on the Lower East Side. Given vague directions, he had ideas. Lots of ideas, in fact, none of them close to the beaten path and all delivered succinctly, without any of those odd personal anecdotes some sommeliers love to tell about the time they played fetch in the vineyards with the winemaker’s Russian wolfhound.

Wildair is owned by Mr. Stone and Mr. von Hauske, the chefs from Contra, just down Orchard Street, and it’s nice to sit at one of the high tables and map your own meal here instead of buckling in for Contra’s set menu. The harmonies in raw scallops in a fruity cucumber broth with grapefruit section and crinkles of dried kale were deeply unexpected; I was caught off guard again by the richness they brought out of delicious white shrimp caught in Georgia just by poaching it in olive oil and then crisping the shell.

The Four Horsemen, opened in Williamsburg, Brooklyn, by the musician and D.J. James Murphy this summer, is the bar where I’d send anybody who asks, “Where Brooklyn at?” The décor is Scandinavian-chill. Servers are smart but not geeked-out about natural wines. Nick Curtola’s menu indulges in plenty of current small-plates tropes: dairy products as sauce, seeds and puffed grains as grist, beef tartare as every New Yorker’s birthright. But there are flickers of originality, too, like the broiled brandade of hake on toast that is as sweet as crab meat thanks to kernels of corn.

A few miles south in Cobble Hill, June adopts a romantic-Parisian mode. The walls are hung with mirrors in sinuous Art Nouveau frames. Tom Kearney, the chef and proprietor, cooks seasonal ingredients in a relaxed style, with a strong instinct for combining flavors. Sesame oil makes a welcome appearance in a bowl of garlic-marinated cucumbers, sliced plums and creamed feta. Baby corn and Thai basil were the last things I thought I’d see at a natural wine bar, but they’re perfect on toast covered with mussels and their spicy juices.

The dangerous thing about chefs’ taking bar food seriously is that they may start expecting us to take it seriously, too. Stephen Tanner doesn’t make that mistake. A celebrated chicken fryer and a champion of no-collar cuisine, Mr. Tanner is the chef at El Cortez, a new tiki bar in the industrial wonderlands of Bushwick, Brooklyn. I’d call his weirdly good taco salad, nachos, chimichangas and chicken sliders “drunk food with integrity,” but Mr. Tanner may object to the “integrity” part. Instead, I’ll say that eating at El Cortez is like finding a rogue Taco Bell whose chef threw out all the recipes and started cooking with real ingredients.

We may go to restaurants to pick up on a chef’s vision. But as Mr. Tanner seems to know, we go to bars to have visions of our own. While tasting-menu counters have adopted the seating style of bars, the ethos couldn’t be more different. At those places, the server may as well say, “Let the show begin.” At the new crop of bars with food that’s better than it’s supposed to be, the greeting is more like the old-time bartender’s salutation: What’s your pleasure?

Correction: September 8, 2015
An earlier version of this article and slide show misstated Aaron Taber’s role at June. Although he worked there briefly after leaving Grindhaus, he is no longer the chef. The proprietor Tom Kearney is the current chef.
Add to Favourites
News