Alain Ducasse interview: The French chef on women in the kitchen, and life in Paris after the attacks

A miniature army of black trompette mushrooms awaits its fate on a blue cloth as a chef picks over them. One is held up for inspection – a wisp of black velvet with a perfectly furled stem. Another chef – me – selects our best-looking sourdough. Nearby, Robin Gill, head chef and owner of The Dairy restaurant in Clapham, south London, paces while eyeing the pans arranged on the stove. He has cancelled his plans for today. Cancelled, because Alain Ducasse has just sat down for lunch. For Gill, this is “like having the chance to cook for Escoffier” – the grandfather of French cuisine.​

The 59-year-old French chef has 23 restaurants in seven countries, including two in London, and a total of 20 Michelin stars. He also runs cookery schools, has written numerous cookbooks, and last year he even devised a menu for the International Space Station (bon app, Tim Peake!). Back in The Dairy kitchen, seven chefs flock around each plate as it leaves the pass. Later, an excited murmur ripples through the kitchen: Ducasse liked it. That night I, the novice, hatch a plan to win an audience with the master.

Two months of badgering later, I’m perched on a stool at our sister restaurant The Manor, also in Clapham, nervously flicking through my questions: on the industry, his opinion on the current chef shortages in the UK, how he feels about women in kitchens, and how much cooking a chef with 23 restaurants actually does.

A sleek black car pulls up and Ducasse hurries in, dressed in a sharp grey suit. He has come straight from the airport and has a packed schedule in London, visiting his own restaurants and dropping in on the Chelsea antique shop Bentleys (to pursue his hobby, collecting vintage luggage and travel trunks). He surveys the restaurant and is immediately curious about the artwork and furnishings. He fires the first questions: “Where are they from? How do we source them?” (Ducasse prefers to conduct interviews in his native French; as my questions and answers are translated, I interject in my mediocre French.)

We are meeting not long after the Paris terrorist attacks of 13 November, and talk turns to his pride in the restaurant industry’s response to the atrocity. “I was in New York a week after the 9/11 attacks,” he says, “and the atmosphere was the same in Paris afterwards. We must continue living our lives as normal. No one has the right to change our destiny,” he states, with no little passion. A few days after the Paris assault, in a pointedly Parisian show of solidarity, he had organised a lunch for some big political figures at the Eiffel Tower. Though, he adds, “There were more security personnel than diners.”

Such a display of support was the loyal act of a figurehead of French cuisine. Yet Ducasse has endured criticisms that his empire – a term he bristles at – has long prevented him from spending enough time behind the pans. His longstanding response is that he had plans to get out of the kitchen by the time he was 28, following a plane crash in the French Alps, of which he was the sole survivor.”The pain and suffering I endured turned out to be a starting point in the way I envisaged my work as a chef,” he says. 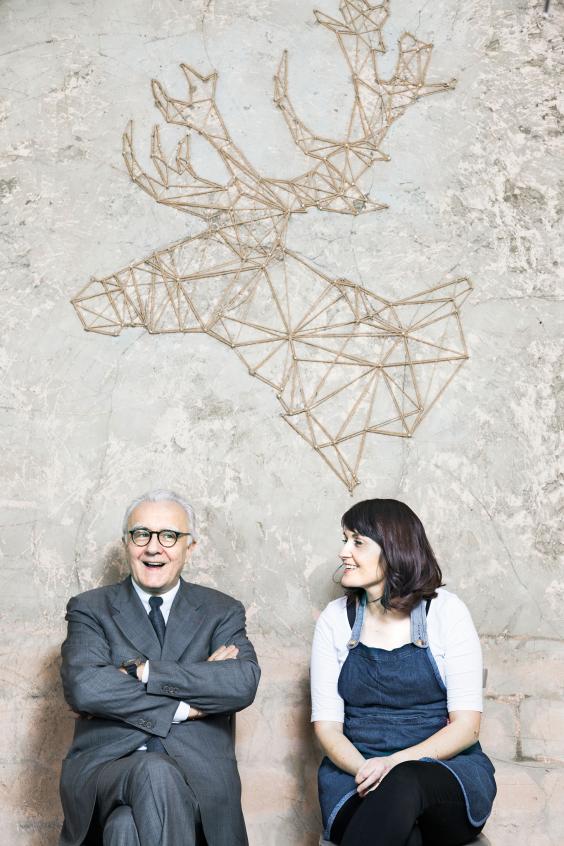 Following his rehabilitation from severe injuries, he began to delegate the cooking on a daily basis to his chefs. “It opened up a way I did not see before: the possibility of running high-end restaurants in different locations simultaneously.” Ducasse swiftly went on to become the youngest chef to win three Michelin stars, aged 33; in 2006, he became the first chef to win three stars in each of three restaurants.

It might never have come to pass: had Ducasse’s mother had her way, he would still be in south-west France, running the farm where he grew up. When he announced at a young age that he wanted to cook, she sent him to train in local routiers (road restaurants), hoping that the harsh reality of cooking might deter him. One of his earliest memories of kitchens is of plucking turkeys for Christmas when he was 16. He laughs at the recollection. “The harder it was, the more I simply wanted to cook.” When he went to hospitality school in Bordeaux, he left before the end of the course and started working in restaurants: “I wasn’t learning quickly enough.”

I’m also a chef at the start of my career, and keen to learn about his view of women in the traditionally macho environment of kitchens. Several of Ducasse’s head chefs are female, of whom he speaks very highly: “It has always k been important for me to have women in my restaurants, both front and back of house.” The Michelin-starred Hélène Darroze, head chef at the Connaught in London, trained under him at the Louis XV restaurant in Monaco, and was encouraged by him to begin working in the restaurant kitchen. “Two of my head chefs are female. Laetitia Rouabah at Allard, perpetuates the legacy of Marthe Allard – a ‘mother cook’ who founded the restaurant in 1932 – and brings it up to date aptly. At the helm of Benoit, one of the last authentic Parisian bistros, we have Fabienne Eymard. Both maintain the traditions and bring their touches to those places.” 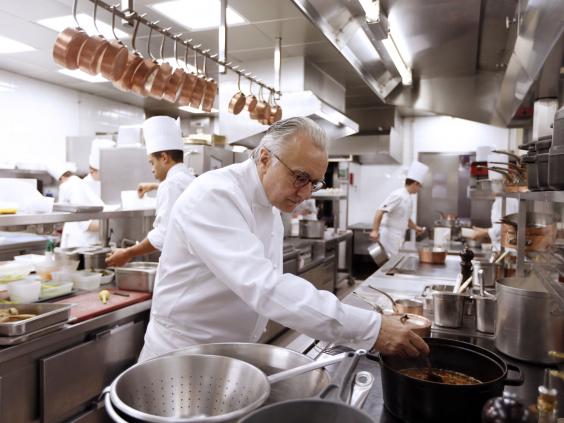 Ducasse in the kitchen of his Louis XV restaurant in the Hotel de Paris in Monaco, 2012 (AFP/Getty Images)

In 2011, Ducasse established the Femmes en Avenir (Women of the Future) programme in association with the French government to encourage women in the outskirts of Paris to earn a culinary diploma and then into relevant employment. Ducasse points out that cooking itself is a “social ladder” and that regardless of background, “anyone can start as a commis and become a successful chef”.

Provided, that is, that they are willing to work hard enough. “This difficult trade”, as Ducasse calls it, is often portrayed unrealistically in TV shows that claim to reveal the working life of restaurants. “Beyond the glamour, one must not forget that our trade is very demanding,” he says. “But cookery shows can reactivate the desire for young people to be part of this adventure.”

What’s more, Ducasse believes these shows could help combat the current shortage of chefs in the UK: according to reports at the end of last year, there has been a drop in the number of students enrolling in chef courses. If the trend continues, it’s thought there will be a shortfall of 11,000 chefs by 2022.

Given the relentless nature of the restaurant trade, how does he remain motivated after so many years? An obsession, he tells me, with talent and diversity. By way of example, Ducasse starts enthusing about a Japanese chef he met two years ago, Toshio Tanahashi, an expert in shojin cuisine, a vegetarian Buddhist tradition. Ducasse invited Tanahashi to work at his restaurant at the Plaza Athénée hotel in Paris to learn from his techniques and, indeed, pass on his own. “We wanted to capture a few characteristic flavours, such as tofu and seaweed. Some elements of Japanese cuisine were retained by integrating them into our own vision and culinary culture.” 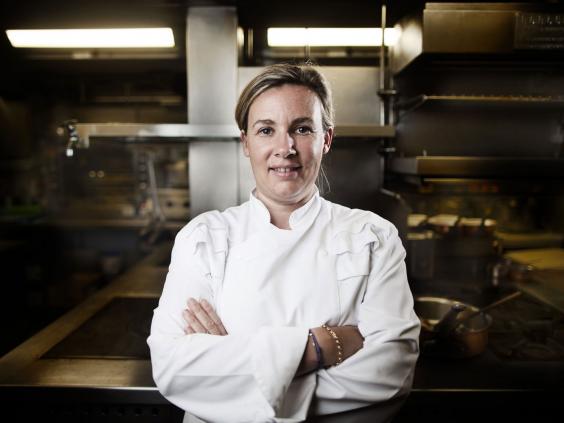 Still, Ducasse is often viewed as a chef most interested in cooking up new business ventures. In other interviews, I find little detail about how he actually now enjoys cooking. He insists it remains his “hobby” and, at home, “I am both the chef and the commis.” At his country house in the Basque region of France, he says he has the time at weekends to seek inspiration from his local market and cook with his favourite ingredients: vegetables from his garden and “freshly caught fish straight from the boat”.

In fact, fresh fish and veg are now the predominant ingredients on the menu at Athénée. It was big news in the world of fine dining when Ducasse announced in 2014 that the restaurant would be refurbishing, and reducing the number of meat dishes it would serve. When it reopened, Michelin removed one of its three stars. Can haute cuisine retain its cachet, I ask. Ducasse replies by drawing a parallel between fine dining and haute couture: “Each is a window to their industries,” he says, “creating interest and setting trends.”

Nevertheless, he adds, his restaurants are a portfolio of fine dining and bistro cuisine. And the one venture that Ducasse will tell me he has in store for 2016 (“I have many, many plans – too many”) is a bistro, in the Les Halles neighbourhood of Paris.

Time is pressing and his restaurant at the Dorchester beckons. If he hadn’t been a chef, he would have been an explorer and architect, he tells me: “[Now] I get to do all three.” I ask him when he might stop. He smiles… “I guess I will keep doing this for as long as I can.” Before leaving for his restaurant, he invites me to visit and stage (do kitchen work experience) at the Plaza Athénée. Who can say no to the master?