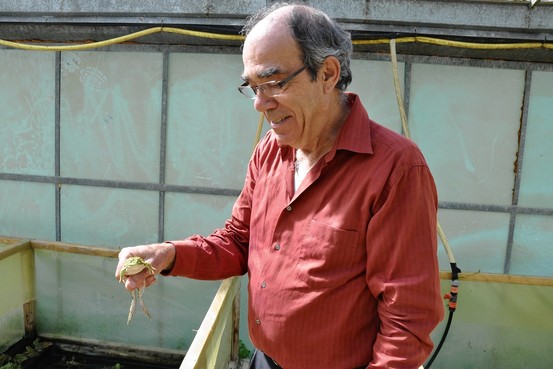 André Neveu works with frogs at a laboratory in Rennes, France. Chloé Domat for The Wall Street Journal

RENNES, France—To the delight of French frog-leg aficionados, André Neveu created something of an amphibian revolution. Now, the fleshy spoils of his success may be slipping away.

The scientist devoted much of his career to changing the feeding habits of Batrachians—a tasty but difficult species to raise in farms given that most of them prefer to eat live prey.

It has been a tough assignment. Although France has maintained its global standing as the homeland of frog eaters, native frogs are long gone. Wild frogs here are listed as endangered species and protected by a fishing ban. As a result, most of the legs served in French restaurants come from overseas. The government reports that the country imports between 3,000 and 4,000 metric tons of frogs every year—mainly frozen meat from Indonesia and some live animals from Turkey or Egypt. 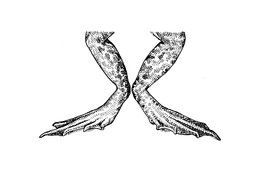 The trade gap convinced Mr. Neveu to share his know-how to help sate French palates. “Finding the solution to made-in-France frogs was a patriotic challenge,” says Mr. Neveu, who puts his age slightly south of 70.

Mr. Neveu’s desirable legs—or cuisses de grenouilles—gave chefs across the country a kick. And while his French frogs cost almost three times as much as Indonesian imports, Mr. Neveu and his farming partner Patrice François say they have been overwhelmed by demand.

“I have to refuse orders every week,” says Mr. François.

Many of the critters end up in the frying pans of Thomas Boutin.

“The best part is that Patrice sells frogs that are cut à la lyonnaise, with the back bones and the arms still attached to it,” says Mr. Boutin, chef and owner of Le Vieux Crapaux, or the Old Toad, which opened its doors in Paris’s upscale 16th arrondissement in June.

The young chef, in his 30s, has fulfilled his dream of serving the tiny garlic-infused limbs cooked in accordance with his grandmother’s recipe.

With their small operations, Mssrs. Neveu and François manage to produce only about three to four tons of meat a year—barely enough to satisfy current customers, let alone the five-star restaurants that have begun to call. Le Vieux Crapaux alone swallows nearly a third of the current farm output.

But now that Mr. Neveu has retired from his government-funded lab—and with no other producers in sight—culinary types like Mr. Boutin are worried that their heady frog-leg days may be waning.

He caught his first wild species relying on fishing tricks he had learned from an uncle, and created makeshift pools with buckets, black tarpaulin and plastic pipes.

Mr. Neveu’s fascination with frogs caused some familial tensions. “My wife complained I was spending more time in the lab than at home and my daughter threatened to launch a commando operation to free the animals,” said the scientist while walking between pools at his lab, his voice dulled by the croaking of hundreds of frogs.

Mr. Neveu was about to reach a dead end when he stumbled upon a colony of Rana Ridibunda in a field near the Rennes University. As a prank, “students often take frogs from the lab and free them in the girls’ dorms,” he says. “Some must have escaped that way.”

It was a lucky break. The Rana Ridibunda is bigger than other frogs in the area and it reproduces just fine in captivity. Perhaps most important, it is “smarter,” says Mr. Neveu. And less finicky. Only the Rana Ridibunda could be convinced to consume the dry pellets necessary for raising domesticated frogs.

The conversion wasn’t so simple. At first, many of the frogs were confused. Weak individuals developed anorexia while dominants sometimes resorted to cannibalism. Applying conflict management techniques, Mr. Neveu sought to put Darwin’s theory of evolution on fast forward—at a frog’s pace.

He put the trouble makers into a different pool to improve the group dynamic. After 15 generations and over 20 years, the animals had fully adapted. At last, dry pellets were on a frog’s daily menu.

Mr. Neveu gained widespread recognition in scientific circles. His publications and lectures have stirred great interest from Brazil to Madagascar to Vietnam, where frogs have been raised according to more empiric methods and frequently suffer from a high death rate.

Despite such far-flung success, Mr. Neveu still needed to find a local farmer willing to team up with him to realize his dream.

That man was Mr. François. Born to a family of fishmongers, Mr. François says he immediately accepted the challenge.

Trouble was that France’s Environment Ministry listed all Rana Ridibunda as an endangered species, whether wild or raised in a farm.

Mr. Neveu says he used some connections to talk the ministry into declassifying the frog. After more than five years of negotiations, Mr. François, the farmer, received a special authorization.

Launched in 2010 and nestled in the small southern French town of Pierrelatte, Mr. François’s frog-raising facility benefits from abundant supply of hot waters released by the cooling systems of nearby nuclear installations.

Now, to boost domestic frog production, Mr. François would like other farmers to replicate his project. The problem: France’s Environment Ministry has yet to deliver new exemptions to the national fishing ban.

“The status of each species will be re-evaluated based on the assessment of the threats it undergoes,” a spokesman at the ministry said.

In Rennes, Mr. Neveu has no successor but continues to look after his lab. Inspecting the nursery, he howls when he sees how an assistant used a landing net to collect frog eggs. “I told them to use papyrus leaves! They will get damaged!”

Touring the pools, he wonders whether genetics will one day allow scientists to help an amphibian achieve the aspiration of Jean de La Fontaine’s character in the 17th century fable: “The frog who wished to be as big as the ox.”

“Sometimes I feel they behave just like little humans,” he says.