For too long, we’ve written off chicken as the safe choice, bland and predictable. But with flavorful heritage breeds, farmers and chefs are revealing a wilder side 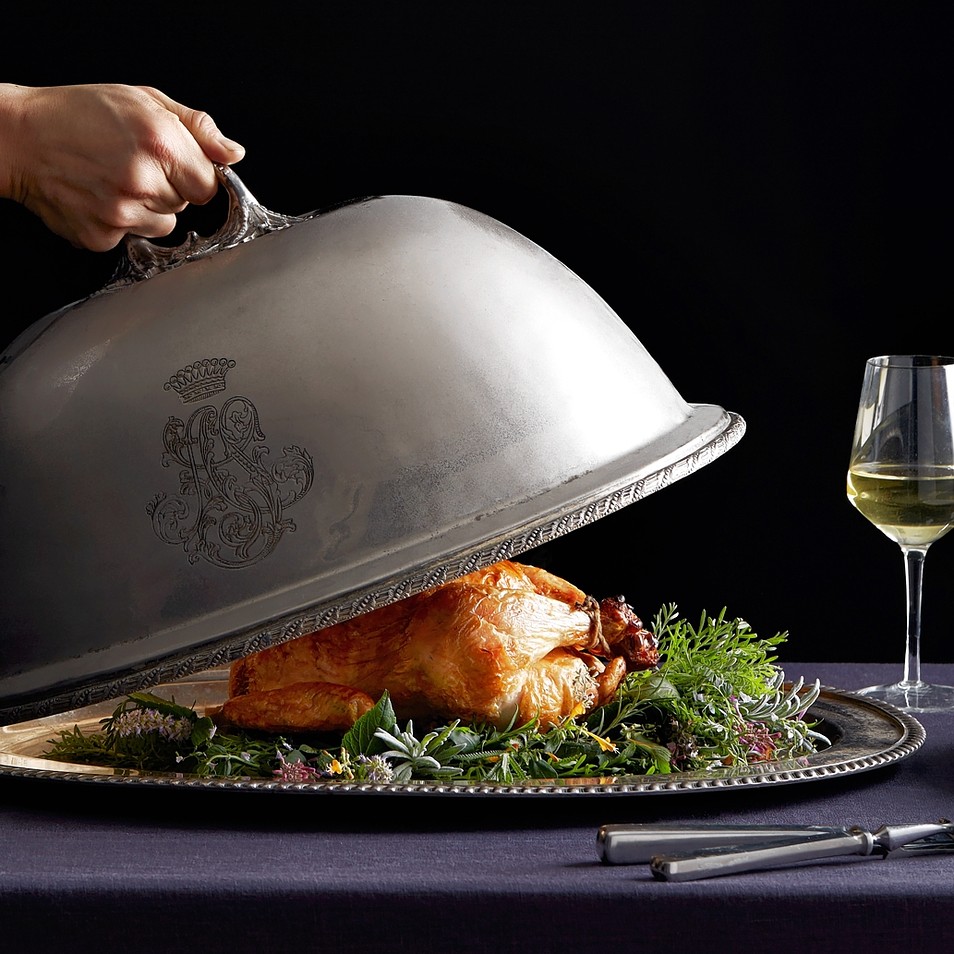 FLIGHTS OF FANCY | Once an obligatory meal for the unadventurous, chicken is moving to the top of the menu. ARMANDO RAFAEL FOR THE WALL STREET JOURNAL, FOOD STYLING BY JAMIE KIMM, PROP STYLING BY STEPHANIE HANES

By MATTHEW KRONSBERG
Dec. 26, 2014 5:25 p.m. ET
“CHICKEN gets a bad rap,” said Annie Pettry, chef and partner at Decca restaurant in Louisville, Ky. “It can be seen as place filler on the menu, the easy route, an option for a less adventurous eater.”

That’s yesterday’s news. A coterie of breeders, farmers and chefs are offering birds that sing out with flavor. Whether it’s at restaurants like Ms. Pettry’s or at the Nomad in New York—where the roast chicken for two is an $82 must-get—chicken is moving to the top of the menu, elbowing aside prestige proteins like steak and lobster.

SERVE UP A BOLDER BIRD 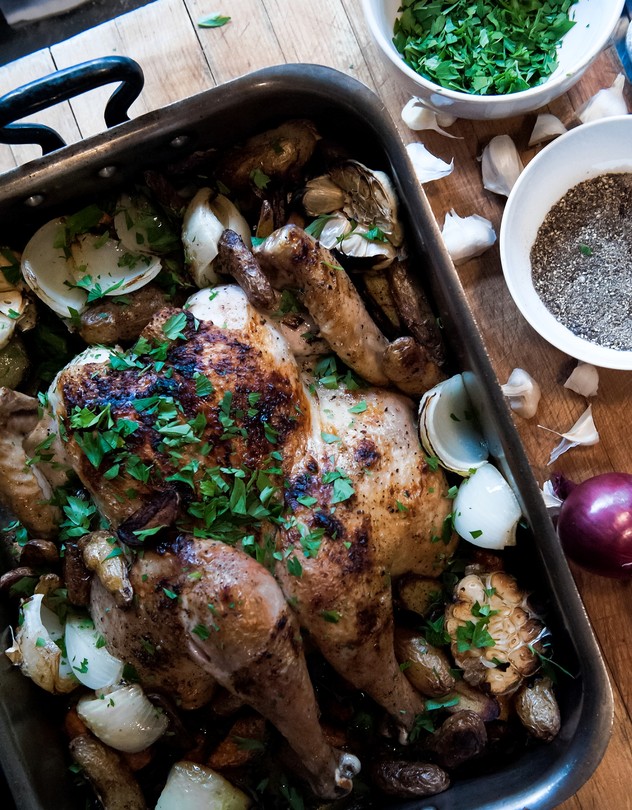 Now, we have another Gallic bird to cluck over. The dream of bringing the Bresse, long considered by francophiles to be the finest tasting chicken in the world, to North American markets is finally gaining traction. Known for their firm, yet buttery flesh, the chickens are pasture-raised and then “finished” on a diet of dairy-soaked grain or bread, which fattens and enriches them. Greenfire Farms, an importer and breeder of heritage fowl, is getting Bresse birds into the hands of small farmers like Brice Yocum, whose flock grazes and pecks beneath the walnut trees of Sunbird Farms in Visalia, Calif. The process of raising Bresse chickens is slow, labor intensive and expensive, but, said Mr. Yocum, “I do what I do because it’s better.” Grazing is key to their rich taste and muscle tone.

While Mr. Yocum plans to keep his operation small and local, Riley Starks and his partners have bigger ambitions for Poulet Bleu, a North American-bred version of the Bresse that he plans to bring to market nationally by early spring. At Nettles Farm on Lummi Island, Wash., Mr. Starks not only lovingly raise designer birds but also run what must be the most luxe poultry-centric B&B in the country. Guests in the Farmhouse Suite have access to a $25,000 Wood Stone oven and the opportunity to cook Nettles Farm-raised Poulet Bleu as well as highly prized Austrian Sulmtaler chickens. To some, this is the equivalent of being given the keys to a Lamborghini and a hundred miles of open road.

Just down the hill from Nettles Farm, on the island’s western shore, is Willows Inn. There, chef Blaine Wetzel has developed a reputation for spectacular multicourse meals highlighting locally foraged and grown ingredients like reindeer moss. Before the more esoteric offerings come to the table, though, guests start with freshly baked bread and a dish of roast chicken drippings, mainly from birds raised by Mr. Starks. “They totally redefined what I thought a chicken should taste like,” Mr. Wetzel said. 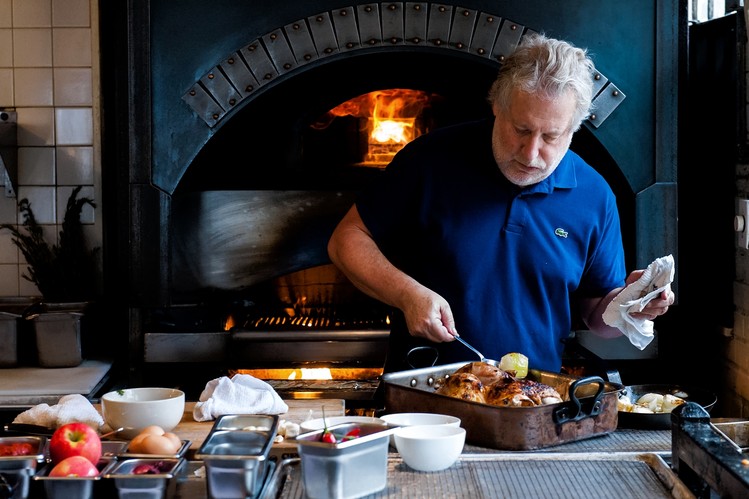 ROAST MASTER | Chef Jonathan Waxman prepares a capon,a type of chicken he describes as ‘God’s gift to the thrifty.’ CHARISSA FAY FOR THE WALL STREET JOURNAL
Turns out, what a chicken “should” taste like depends largely on context—and France isn’t the only frame of reference. In preparing to open Foreign Correspondents, a Northern Thai restaurant in Houston, chef P.J. Stoops found no locally available chickens comparable to the lean, flavorful fowl he’d tasted in Southeast Asia. He’s working with a local farmer to breed birds that may be not only the most authentic Thai chickens in the U.S. but the most authentic chickens, period. The species, after all, originated in the jungles of South Asia as a lean and wily game bird. Over thousands of years, it made its way around the world, morphing into different breeds to satisfy the particular needs of far-flung regions, cultures and cuisines.

‘They redefined what I thought a chicken should taste like.’
Before the middle of the 20th century, America’s chickens were a varied and hearty lot. The midcentury Chicken of Tomorrow project changed all that, explains Andrew Lawler in his new book, “Why Did the Chicken Cross the World? The Epic Saga of the Bird that Powers Civilization.” Mr. Lawler writes, “Just as the Manhattan Project brought together university scientists, industrial engineers, and government administrators to unlock the secret of the atom, the Chicken of Tomorrow project drew on thousands of poultry researchers, farmers, and agriculture extension agents to fashion a new high-tech device.” That “device”—the Cornish Cross breed of chicken we have today—is built to live fast, die young (hatchling to supermarket in as little as 30 days) and leave a bland but meaty corpse.

Deviled Chicken Skewers With Bibb Lettuce and Pickles
Buckwheat Noodles With Thai Grilled Chicken
Braised Chicken With Chestnuts
Frank Reese of Good Shepherd Poultry Ranch in Lindsborg, Kan., is bringing back full-flavored breeds squeezed off the shelves by the Chicken of Tomorrow, with a combination of scrupulous animal husbandry and missionary zeal. If you grew up in the U.S. and were on solid food before 1975, the taste of a Plymouth Barred Rock, a Hamburg or any of Reese’s other heritage breeds can carry a potent emotional charge. “When people call asking how to cook one of my chickens,” said Mr. Reese, “I say, ‘Get a cookbook written prior to 1950. Probably best if you get a cookbook printed in the 1930s.’ ” If that sounds complicated, it isn’t; it just means cook it slow and low. A covered roasting pan in a 300-degree oven for two to three hours will do the job.

The investment of a little extra time and money—these birds aren’t cheap—pays off, and then some, in flavor. “The first time I ever had Frank’s birds, it was like I was eating chicken for the first time,” said Andrea Reusing, chef-owner of Lantern in Chapel Hill, N.C. And that’s the thing: Whether you’re from Chapel Hill, Chiang Mai or Chartres, finding the right bird makes all the difference. At long last, “tastes like chicken” means something good again.

Butcher cases were once populated with a range of poultry products that went far beyond the 3½-pound Cornish Cross roaster that now rules the roost. Fortunately, a few producers and purveyors are expanding the options out there. Here are some sources for those who are choosy about their chicken. 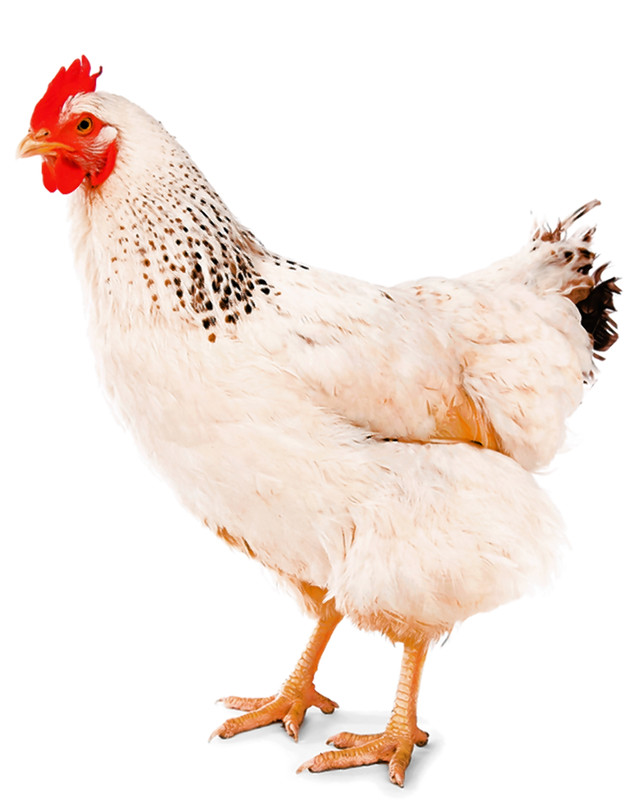 Delaware is one of the heritage breeds making a comeback. ENLARGE

Heritage Foods USA, an online retailer of meats from small farms around the country, offers a rotating selection of breeds from Frank Reese’s Good Shepherd Poultry Ranch. Whether it’s a Plymouth Barred Rock or a Delaware, you can be sure both pedigree and taste will be second to none. heritagefoodsusa.com

Poultry with a waiting list? If you want to order chicken raised to be every bit as good as the original French Bresse—which is to say, pasture-fed and finished on milk-soaked grain—it may be early spring before it arrives, but it will be worth the wait. pouletbleu.com

Capons—castrated roosters that fatten to the size of small turkeys—“are God’s gift to the thrifty,” said chef Jonathan Waxman. “One bird has a ton of meat. Plus, the bones yield a fantastic broth.” Brawny where the Capon is lush, rooster is essential for true coq au vin. joyce-farms.com

These Amish-raised birds feed on fresh vegetables and grow more slowly than supermarket chickens, proving that tender and mild does not have to mean mushy and insipid. Green Circle birds are served by chefs Daniel Boulud and Eli Kulp. dartagnan.com

A side product of cooking chicken, schmaltz—rendered chicken fat—makes everything it touches both richer and a little more comforting. At Decca, in Louisville, Ky., Annie Pettry uses schmaltz in (and on) everything from croutons to aioli, pie and biscuits. Hudson Valley Foie Gras offers both plain and onion schmaltz by the quart. hudsonvalleyfoiegras.com