After expanding his culinary empire internationally in Singapore and London in recent years, Daniel Boulud launched restaurants in two major American cities last month:  a Bar Boulud in Boston, Massachusetts, and a DBGB in Washington, DC.  We took the occasion as an opportunity to ask the indefatigable toque to hop into the Kitchen Time Machine and discuss events past and present–first up, a few questions about current affairs such as how he manages it all from his headquarters in New York City, an update on the Bocuse d’Or USA, and his latest Citymeals-on-Wheels initiative. (Note:  This interview was conducted during Kitchen Time Machine’s summer hiatus.)

Andrew Friedman: You have a lot of restaurants in a lot of cities around the world at this point but they all have a Daniel Boulud feel about them.  How do you make that happen?  Do you have a certain number of times that you try to visit each place each year?

Daniel Boulud:  The corporate chefs and I work together closely.  The chefs and our team have a weekly meeting.  We monitor their menu.  We monitor their performance.  And then, Singapore, for example, we don’t have the four seasons there so the menu changes but it’s not as important to follow the same seasons as Toronto, for example, or London.  And the market in Singapore pulls from Australia, New Zealand, Europe, and Asia, so there’s a vast opportunity sometimes to do things which are maybe not so conventional as the other places.

But in general we work closely with the chefs. We want every one of our restaurants to be a chef‑driven restaurant. We don’t come with a book every time and impose everything on the chef.  We impose enough to maintain our identity, to maintain our size, to maintain our DNA, and to rely on the classic recipes that have been established and where we don’t want any change, then we impose, of course.

Of course we also have silent shoppers who come regularly so we have reports on food.  We also have the customer, my friends, everybody.

Let’s say today the chef found some beautiful John Dory and he wants to do something with peas and he wants to do something with lettuce and we want to make a dish that might be on the menu for a couple of weeks, a day, or a week or whatever, then he has access to a cloud, and in the cloud there’s the recipe and there’s the description and dish of every chef in the company.  Every restaurant has their menu with their description and the dish that they’re doing at the moment, so that’s the first place they can start if they need to answer the question, “Am I getting out of the box?”

So in this way everybody can sort of float into the cloud and look at what everybody else is doing in the company.

And then we have a weekly meeting with all the management and we discuss every aspect.  Of course we also have silent shoppers who come regularly so we have reports on food.  We also have the customer, my friends, everybody.

You actually use silent shoppers?

Of course.  A lot. I would say we receive about six reports a month between all the restaurants.

From an outside company?

Every restaurant every three months.

What is the main difference between your DBGB concept in DC and here, and your Bar Boulud in Boston and here?

I think having only one restaurant in one city compared to six restaurants [as we do in New York], we can definitely pull from a little bit further than just that particular restaurant.  It’s not a carbon copy from New York to DC or Boston.

You mean with dishes that are unique to those locations?

The DC DBGB, it’s not like downtown New York, Lower East Side for sure.  It doesn’t have that maybe shabby vibe.  It’s maybe a touch more sophisticated in terms of approach but yet very much that feel of a casual brasserie where it’s not totally a French style design.

Bar Boulud in Boston is with Mandarin.  We already have a relationship with them in London. Bar Boulud London has been very good for them and very good for us.  And while that was not the first French bistro London has seen I think it was really the first French bistro where there was an amazing wine list, where there was a real American touch to the experience because of the burgers on the menu.

When we have one restaurant in a city instead of six, we have an opportunity to offer a wider range of Daniel Boulud.

All of your restaurants, even a place like DBGB, with the burgers and sausages and its style of food, feel like they’re in a very traditional vein, on their own terms.  There are obviously a lot of things going on right now in the restaurant world.  There’s the whole molecular/ modernist movement or whatever you want to call that.  There are all these counter restaurants. And so on.  You have a traditional sensibility about what you do.  Do you think it’s important to maintain that? 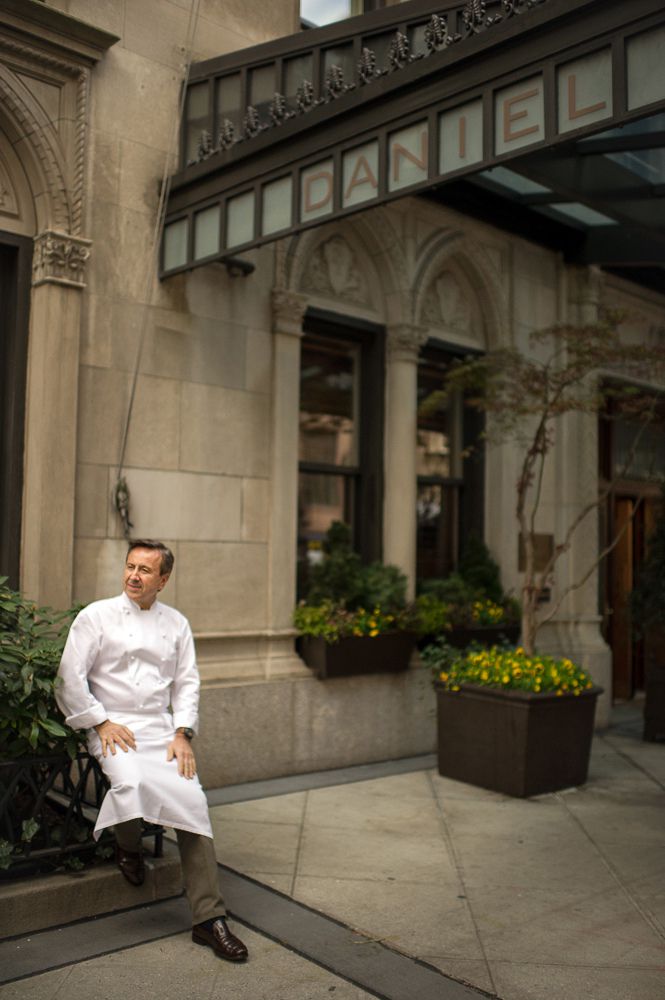 No, no.  I love the counter style restaurant but it hasn’t been proven that those will last twenty years.  Do you know what I mean?  It’s fun for a chef at the beginning to have fun with his restaurant.  They build it on a shoestring.  It’s a different style.  I mean, unless it’s really high‑end like Joel Robuchon with L’Atelier where it’s basically taken from the Japanese counter service, or diner service for that matter. I love going to a burger place where they are cooking the burger in front of you around the counter.  I like the counter service, but financially I just don’t know if the model can work long term.  I mean, the 18‑seat counter, it’s entertaining.  People want to go once but are they going often?  That’s the thing.  You can live on it, but you have your limitations as well.  It’s like every other business.  But I do think it’s very exciting.  For a chef to want to do a one‑man show, counter service is superb.

What about the whole molecular thing?  That seems like it’s not really part of the mix for your group.

You’d be surprised.  There are many applications we use.  We are not the king of powder for sure because I feel that, as much as many powders are natural and they come from natural ingredients, we have a limitation to how much we can use them.  But at Daniel in pastries, at Cafe Boulud, in many of our restaurants we are definitely using applications related to molecular cuisine.

What is molecular cuisine?  I think today it’s a very wide, wide, wide range. For example, I will not make an apple balloon like, for example, Grant [Achatz], because this is really beyond just the basic molecular.  I think it is in the “high.”  Grant, I think, has always been in a very sort of high practice of molecular.  And we are in the low practice, I will say.

Do you think what you’re describing is true at more restaurants than people realize?

Of course.  And I think it’s part of cooking with the new generation of chefs. I think the pleasure of working with younger people is they have a different type of training; there’s a cross‑training and cross‑knowledge establishing itself with younger chefs

I think the pleasure of working with younger people is they have a different type of training; there’s a cross‑training and cross‑knowledge establishing itself with younger chefs.

I remember, for example, Ferran Adrià with the green olive with the olive oil inside.  Will you be able to eat a whole plate of it?  No.  But as a bite it was interesting.  It was unique.  So now you take the green olive and you put it into the preparation of a dish with an entire other preparation, then that becomes interesting and that’s what we see.  For example, making something with a little bit of a shell, a soft shell on the outside and the liquid inside.  Pastry uses a lot of that, and sometimes in certain preparation we can use it, but we don’t serve a dish made of just that unless you serve, like I said, twenty-five, thirty courses and it’s part of one of the bite.

How is the training is going for the Bocuse d’Or?

I think it’s going well.  The train is out of the station.  I think Phil Tessier and Skylar [Stover] are doing very well.  We also have a great report from also David Beran, Grant, and Gavin as well. I think this year there’s a real dialogue with the candidates going.

You mean in terms of developing what’s going to be presented?

Yeah, in term of continuing to develop the actual dish.  I think there’s a good dialogue. That really helps, if a candidate is open to dialogue.

You recently made a new commitment to Citymeals-on-Wheels, the Chefs Deliver initiative.

Well, I’ve been co‑president for almost three years, and I have done initiatives with all six of my New York restaurants where we cook hundreds of meals and one day deliver all those meal to the elderly.  And I felt this initiative was very rewarding for the chefs working for me and for us as, you know, getting supportive through Citymeals and showing how much chefs do to support Citymeals in their initiative and to brighten a little bit the day of those people by having a surprising meal one day done by, you know, Cafe Boulud or Bar Boulud or Daniel.

So following that I took the initiative to ask a group of friends and chefs.  At the beginning we were at Daniel having lunch together for a special occasion and I explained what I wanted to do, that it was not going to happen too much.  It’s once a year to cook a couple of hundred meals, and every month we will do a group of chefs—three, four, five, depends on their ability—and each chef will cook hundreds of meals and deliver some of the meals as the program of delivery of Citymeals.

So the chefs go out on the run with the existing delivery system?

Yeah, yeah, exactly.  They can’t deliver all of them but at least they go and visit some of the elderly.  And that really gives them a sense of pride, of doing that for people who can’t afford to buy a meal, can’t afford to get out, to cook a meal for themselves.  And so we have been doing that and I think it’s wonderful.  I only ask the chefs to do it once a year.  We have about forty chefs in New York participating.  So I think it’s great. Jean-Georges did it in June, with a couple of chefs from other restaurants.

Stay tuned for part two of their chat tomorrow, and head over to Toqueland for more of Andrew’s interviews with some of the country’s best chefs.