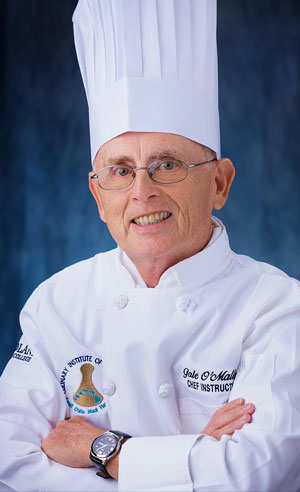 Kapiʻolani Community College culinary arts instructor Gale O’Malley was recognized with the American Academy of Chefs of the American Culinary Federation’s Joseph Amendola Award. Each year since 2008, this national award has recognized a pastry chef or master baker who has shown dedication to the profession and a commitment to mentoring future pastry chefs. Chef O’Malley is the first in Hawaiʻi to be recognized with this award.

In 1981, Chef O’Malley received the Medal of the French Government, making him the youngest and first American-born pastry chef to do so. This award is considered to be the most coveted award given to a chef in the United States.

Amendola was an exceptional culinary educator, author of pioneer textbooks on baking and ice carving and a mainstay of the Culinary Institute of America for more than 60 years. He mentored and encouraged O’Malley to pursue the art of baking even at the time when there was no curriculum for this art.