Hotel concierge services have long been one of the best ways to snag a table at a sold-out restaurant. Reserve, a new startup launching in beta today, is trying to recreate the concierge experience through an app.

Launching first in New York, Boston and LA, Reserve shows you a list of partner restaurants in your city. You specify what time you’re interested in dining and then send a request to the restaurant. If you get the table, the restaurant will receive a photo of you so the host can recognize you when you arrive. The app has you designate your default tipping amount and then processes your payment via Braintree so you don’t have to wait for the check at the end of the meal.

Reserve charges users a $5 fee for the whole process. That’s pretty minimal when you consider the average size of the check at the fine dining restaurants the startup works with. 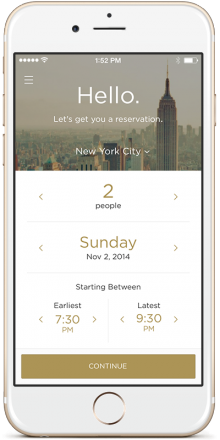 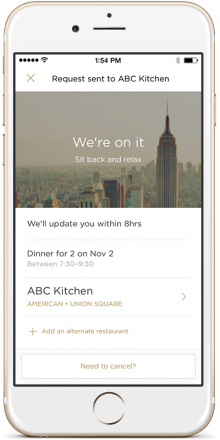 Reserve co-founder Greg Hong said the company’s goal is to make “every part of the dining experience better.” The startup aims to hold your hand through the entire process and then check back in to make sure you had a good time.

The firm has placed a strong emphasis on helping restaurants get more control over their dining rooms. One feature in the app will allow interested diners to bid on reservations by offering to pay a premium, such as 20-30 percent, over menu prices. When I expressed concern that a bidding process could inflate restaurant pricing, Hong noted that the feature is opt-in for both restaurants and consumers.

Reserve charges a $10 per diner cancellation fee and a $25 per diner no-show fee, all of which will go directly to restaurants. The startup is also working with venues to offer special experiences within the app, such as a limited prix fixemenu or a chef’s table.

Reserve is the first company to launch out of Uber co-founder Garrett Camp’sExpa startup studio. Hong and his team raised a pre-Series A round from a number of big-name investors, including Google Ventures, Lowercase Capital, First Round Capital, Advancit, Homebrew Capital, Box Group and Sherpa Ventures. Reserve also announced the acquisition of SoonSpoon as part of its launch.

While I acknowledge there are certainly pain points in the restaurant booking and payment experience, Reserve’s product isn’t designed for me. It seems to me that the problem it’s currently solving is one that VCs have more than normal folks. That said, I’m hoping that Reserve manages to come down-market toward restaurants that I can afford.